Ramon Belmontes and Teniel Campbell are currently en route to Mar del Plata after being selected by the TTCF to participate in the UCI/World Cycling Centre Junior Athlete Training Camp for the next 3 weeks.

Belmontes, 17 and Campbell, 18 will join Junior cyclists from the Western Hemisphere from countries such as Aruba, Cuba, Venezuela, Costa Rica and Argentina in only the second year hosting such an event.

In 2014, Akil Campbell and Keiana Lester were afforded the opportunity to take part in the high level training camp geared towards Junior cyclists in the Pan American region. Coming out of that camp, both Campbell and Lester along with Kollyn St. George were further invited to participate at the UCI World Cycling Centre headquarters in Aigle, Switzerland.

The UCI- WCC satellite centre initiatives have been set up throughout the world to further develop cycling and identify potential promising junior athletes. Belmontes and Campbell will be under the direction of World Cycling Centre coaching staff from the 28th November to 13th December, 2015 at the 250m track on the eastern coast of Argentina. The Trinidad & Tobago Cycling Federation wishes Belmontes and Campbell the best of luck at the camp. 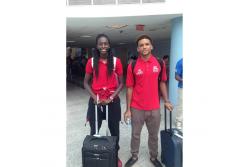