The Trinidad & Tobago Cycling Federation (TTCF) was awarded the coveted Jeffrey Stollmeyer Award (Large Category) for the most outstanding Sporting Administration for the year 2016. The award was presented at the Annual First Citizens Sports Foundation Sportsman and Sportswoman of the Year Award at Queen's Hall on Friday night.

The Jeff Stollmeyer Awards goes to organisation that among other things demonstrates a strong sustainable development programme. Receiving the award on behalf of the TTCF was the organisation's president, Mr. Robert Farrier.

Congratulations to the entire fraternity! 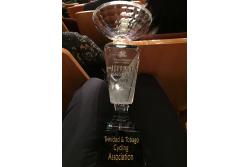