TTCF nominees for Youth Sportsman and Sportswoman of the Year 2015, Tyler Cole and Kollyn St. George were placed onto the list of the Top 6 Youth Athletes for their respective performances in the last calendar year. The annual gala event was hosted by the First Citizens Sports Foundation at the Hyatt Regency on Friday night.

Cole made a name for himself in 2015 after he captured 3 International Medals. He became the first T&T Endurance cyclists of any age to capture a Junior Pan American medal when he won Bronze in the Omnium event in April 2015. The Team DPS cyclist then ran away with double Gold at the Junior Caribbean Championships in the Dominican Republic in August 2015. These performances made him a guarantee in the Top 6 Junior Sportsmen of the Year.

Kollyn St. George was named in the Top 6 Junior Sportswomen after she proved to be the T&T Sprint Queen. The young Breakaway CC cyclist snatched double Gold at the Junior Pan American Championships in Mexico when she first teamed up with Keiana Lester to be crowned the Team Sprint Champions. The next day, she repeated her heroics with a 500m Time Trial Gold, with both efforts being timed in Junior Pan American Records.

Jeron Thompson (Swimming) was eventually named as Junior Sportsman of the Year while 2015 Junior World Silver Medalist, Khalifa St. Fort (Athletics) was named the top Junior Sportswoman of the Year 2015. A hearty congratulations goes out to both Tyler and Kollyn and we hope you continue to fly the flag high! 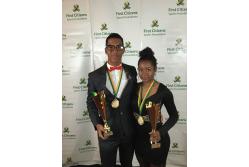