The landmark National Race Mechanic Course – Level 1, the first of its kind ever hosted in Trinidad & Tobago will begin on Friday 15th at the Ato Boldon Stadium, Couva. The three-day event will see twelve (12) bicycle mechanics from throughout the country attempt to be the first to be certified by the Trinidad & Tobago Cycling Federation.

Instructed by former head mechanic at the United States Olympic Training Centre (USOTC) in Colorado Springs, Alan Sekowski, the course has been tailor-made to take the already practicing bicycle mechanics and prepare them to be race ready for Track, Road and Mountain Bike teams. Our already skilled mechanics who accompany our various National teams will now be equipped with the correct skills to ensure that they have well prepared for all events.

Included in the course will be a dry run of setting up and performing functions for an International track event with a tour and simulation at the National Cycling Centre in Couva. The top mechanic at the end of the course will also win a brand new, Bike Mechanic Stand to accompany him during his representations as National Team Mechanic. The certification from the course (or equivalent) will now become mandatory for all race mechanics who will accompany our National Teams in the future.

Sekowski, who arrived in Trinidad on Wednesday night is excited to get started and promises that the intense 3-day course will not only be extremely informative and enjoyable but will improve the performance of our race mechanics.

The TTCF wishes to once again acknowledge the contribution of the Sports Company of Trinidad & Tobago in making this course possible. SPORTT has partnered and ensured that this event, which is yet another sterling example as to how much the TTCF is focusing on the development of all aspects of the sport, became a reality. 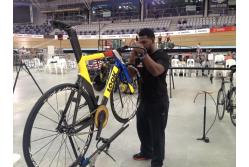