A new state board has been named to oversee the operations of the Sports Company of Trinidad & Tobago (SporTT) and a familiar face to cycling has been given the leading role. Former President of the Trinidad & Tobago Cycling Federation and former top National cyclist, Michael Phillips will now adopt the role as Chairman of the State appointed board.

Phillips who also manages his promotional company, Phillips Promotions and owner of his own bike store, Mike's Bikes in Port of Spain will be bringing his management expertise to SporTT. His cycling legacy spans two decades of top level competition with several local and international titles. In fact, Phillips together with Gene "Geronimo" Samuel and the late Clinton Grant still holds the National Record for a 1000m Team Sprint set back in 1994 in Colorado Springs, USA with a time of 1:01.160.

In a press release yesterday, Phillips stated, "I am honoured to be asked to be served as chair of SporTT. I am excited to work with the Honourable Minister of Sport, Darryl Smith, as we are both motivated sporting enthusiasts." He continued by saying, "I will do my best to have sport in Trinidad & Tobago benefit from a structured and innovative approach to management. I am grateful for the opportunity to make  a difference."

Current TTCF president, Robert Farrier extended his congratulations to Phillips and inidcated that he and his organisation are eager to start working with him to continue the positive development of cycling in T&T. Farrier, whose obvious immedaite concerns include Olympic Qualification and the opening of the National Cycling Centre in Couva will certainly be the centre of upcoming dialogue. 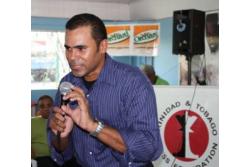