Breakaway cyclist, Ryan Chin rode away with top honours at the Survival OS hosted MTB event, Rumble in the Jungle in Chaguaramas on Sunday morning. Chin captured the three (3) lap event in a time of 1:35:47 some three minutes ahead of his closest competitor in Christopher Govia (Breakaway) while Ryan Mendes (Slipstream) rounded out the top three in a time of 1:46:31.

With the win, Chin moved to the top of the three part TTCF Mountain Bike Series with 62 points, leap frogging over defending champion Peter Sellier (Mike’s Bikes) who suffered mechanical difficulties on the day, crowning Chin as the TTCF MTB Series Champion with Sellier in second on 60 points and Govia in third on 50 points.

Andrew Darwent (Survival OS) had a sub-par day compared to his exploits at the last two MTB Series but still ensured that he gathered enough points to top the Open 2 category with 62 points. The winner on the day, Ryan Abraham (Slipstream) would make a huge leap into second place overall while his teammate Christopher Smith did enough to secure third with a 5th place finish at the Rumble in the Jungle. 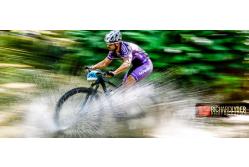