Ryan Chin (Breakaway) pulled off a daring and ecstatic win earlier today in Chaguaramas after he dethroned the defending champion, Jason Costelloe (Beacon) to take the title of National MTB Champion for Elite Men.

In the grueling 5 lap course, Chin and Costelloe distanced themselves from the remainder of the Elite Men by halfway through the first lap. The duo would complete the first two laps together before Chin made his decisive move in the 4th lap. By the time he received the bell, Chin had already opened a 40 second gap on the defending Champion.

As he rounded the final turn, the Breakaway cyclist was a clear winner, punching the air with his right fist as he completed an emphatic win. Costelloe finish some 4 minutes behind while Christopher Govia (Breakaway) repeated his third place from 2015.

The TTCF will like to express our gratitude to all those who were responsible for making the event a great success such as SporTT, Survival OS, Northern Rangers MTBC, Mike’s Bikes, Trailing Edge and the Chaguaramas Development Authority (CDA). 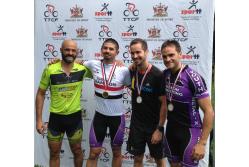