Jason Costelloe (Beacon) defended his National Crown in the Elite Men category after dominating the National MTB Championships on Sunday 19th July at Samaan Park, Chaguaramas. Costelloe who took the lead alongside Ryan Chin (Breakaway) half way into the first lap, distanced himself from Chin with some 2 laps to go, and never looked back.

Costelloe finished the event in a time of 1:32:45 with Chin just under a minute behind while Chris Govia (Breakaway) rounded out the top three. In her first local MTB race, Candace Chin Fatt (Breakaway) obliterated the Elite Women's field in a classy ride to complete her course in a time of 1:07:06, some 12 minnutes ahead of her closest competitor, Maria Gooding.

Peter Sellier (Mike's Bikes) suffered mechanical difficulties in the first lap of the Juvenile Boys' event yet still managed to win his category by 14 minutes. 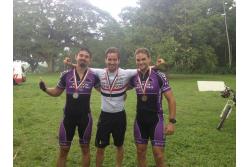