Beacon cyclist, Jason Costelloe has his eyes set on the top prize on Sunday morning when the TTCF National MTB XCO Championships takes over Samaan Park, Chaguaramas. The 2014 and 2015 Champion in the Elite Men Category has shown good form throughout the year but knows that his task will not be an easy one.

2016 TTCF MTB Series winner, Ryan Chin (Breakway) has also stamped his name as a serious contender and one of the favourites to take the grueling 5 lap event throughout the trails in Trinidad’s Northern peninsula. Chin who got the better of standout cyclist Peter Sellier (Mike’s Bikes) in the MTB series will not doubt also fancy his chances to take the top prize. While both Costelloe and Chin eagerly wait to go under the starter’s orders, Chris Govia (Breakaway) is equally ready for the task with consistent finishes throughout the MTB season.

Peter Sellier is the favourite to take the Junior Men category and as well to secure the lone Junior position on the National Team heading to the Caribbean MTB Championships in St. Martin in September. Candace Chin Fatt (Breakaway) will be returning from her Florida base to defend her title and as well to attempt to impress the selectors for a second nod on the National Team.
The Juvenile Men category is also shaping up pretty nicely with MTB Series winner for Juveniles, Andrew Darwent (Survival OS), Dimitri Payne (Unattached) and Enrique De Commarmond (Heatwave) all top contenders for the title.

The Elite, Juniors and Masters pedal off at 7:30am while the Youth Developers will hit the trails from 9:30am on Sunday morning. The event is being made possible by the TTCF and the contributions of Survival OS, Northern Rangers MTBC, Mike’s Bikes and Trailing Edge. 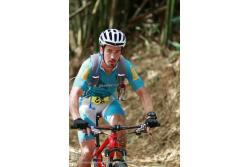