T&T's first ever National Mountain Bike Team have settled in well in Puerto Rico ahead of their debut at the Caribbean MTB Championships on Sunday. The team, consisting of Ryan Chin, Jason Costelloe, Peter Sellier & Candace Chin Fatt accompanied by Brian Sellier (Manager) and Drew Edsall (Coach) were comfortably getting used to their surroundings.

The quartet of cyclists will be looking to take as much out of their advanced arrival to the competition and were already on the trails this morning with their coach and manager. Edsall, a certified US MTB coach also serves as personal coach to Chin and Sellier (P) but has been arduously working through the last two months with all cyclists.

Chin Fatt, based in the US, joined the team while in transit through Miami and is looking forward to what is expected to be a tough Championships. The 2015 National Elite Women MTB Champion impressed the selectors in July, earning her the sole female spot available. National Elite Men MTB Champion, Jason Costelloe will also be looking to impress while Ryan Chin (2nd place National MTB Champs and MTB League) is a key person in T&T's medal bid.

Peter Sellier, celebrates his 16th birthday today while on his first National duty but has already become one of T&T's best MTB cyclists. His domination of the TTCF MTB League for the past two years is evident that he is a bright prospect in T&T's MTB future.

The XCO (Cross Country) style MTB event will pedal off at the trails in Puerto Rico on Sunday 27th September. 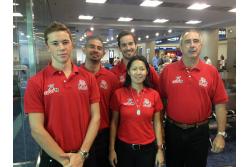