Sellier, 16-years-old, has been undefeated for the year, even though he competes against the Elite men.

“This has been an amazing year,” said Sellier, “I really wanted to win today to round off my year with a 100 percent win rate.” Ryan Chin and Christopher Govia (Breakaway) placed second and third respectively. The top three are coached by Drew Edsall, who has been Sellier’s coach for nearly four years, and was also the coach for the Trinidad and Tobago Mountain Bike team this year. “This is the third year we have put on this event,” said Michael Phillips. “It was previously the Jungle Jackpot, and we re-branded it this year to Jungle Bells, a Christmas theme.” Chin claimed the two-Lap Primes (Start Loop and Lap 1) sponsored by Gatorade and Lifestyle Motors.

The three paced each other throughout the eight-lap race until Sellier broke away in the final lap to secure the win. Chin went on to compete in the optional Bonus Lap (a Time Trial of Lap 9) and won it in a time of 10:15, followed by David Hackshaw (Slipstream) in 11:28. Hackshaw placed 4th overall in Open 1, an impressive result for the 53-yearold.

Enrique Pablo (Unattached) won the Open 2 Division 3-lap race a full minute ahead of second- placed Adande Piggott (MTB Kings). Pablo, a Tinymite, though not new to racing, is relatively new to Mountain Biking and has proven to be very competitive.

Unfortunately Dimitri Commissiong-Payne (also a Tinymite), who dominated the Open 2 Division this year, had to withdraw early in the race due to a broken chain. Christopher Smith (Slipstream) came third.

Free refreshments were provided by sponsors Blue Waters, Gatorade and Yoplait. The event was also supported by Lifestyle Motors. 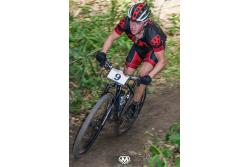