Peter Sellier won Trinidad & Tobago’s first ever Gold Medal in Mountain Biking when he grabbed top honours at the Caribbean Mountain Bike Championships in Puerto Rico this morning.  Sellier continued his winning streak for 2015 as he took first place in the Pre-Junior (Juvenile) category this morning at his first International Mountain Bike Race.

Sellier hit the first of 3 climbs in the first lap of the 3-lap race in second, tailing the lead, a position he held firmly even when the leader tried to break away towards the end of the first lap. “He responded well to a very hard attack from the leader”, Drew Edsall, National team coach continued by saying , “so he is looking very good”.  After the second lap Edsall reported “He has 45 seconds (lead) and should take it (win the race) if he has a clean last lap.  Looking very good!”  Sellier finished in a time of 59 minutes 37.5 seconds, 1 minute and 7 seconds ahead of Jacob Morales from Puerto Rico.

Even as a Juvenile, Sellier's lap and overall times was as well faster than the Junior cyclists who competed just after.

Candace Chin Fatt, racing in Elite Women was looking like another medalist hopeful for Trinidad & Tobago after she was comfortably in third place after the first 2 laps.  A broken chain and the time taken to repair same cost her valuably and inevitably her medal shot.   Jason Costelloe also suffered similar mechanical difficulties after ripping a tyre resulting in him not finishing the event while his countryman, Ryan Chin, completed the 5 lap race in 1 hour and 50 minutes and 41.7 seconds, but was out of reach of a medal.

The Trinidad & Tobago Mountain Bike Team not only benefited from the experience of its debut international race. Their solid performance at this level of competition bodes well for the growth of T&T Mountain Bike and as well allows us to gauge our level to other Caribbean nations. The team inclusive of Sellier, Costelloe and Chin will return to Trinidad on Monday 28th at 9:00pm.


The TTCF wishes to congratulate the entire team on their performance and setting the bar for the local MTB fraternity. 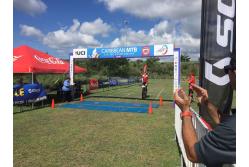