Peter Sellier continued his dominant form from 2015 with an emphatic win at the first ever Mountain Bike Eliminator (XCE) event held in Trinidad & Tobago earlier this morning at Bellerand Park, Chaguaramas. The event which was jointly hosted by Northern Rangers MTBC, Mountain Bike Kings and Trailing Edge attracted a sizeable crowd and cyclists to participate in this ground breaking event.

The young Mike’s Bikes rider started off early after clocking the fastest time in the Time Trial with 1:32.58, about 7 seconds faster than his closest rival in the form of Ryan Mendes (Slipstream). Sellier sailed through his heats in the 1/8, ¼ and Semi-Final rounds, winning each heat pretty comfortably to set up a mouthwatering clash for the final.

The final quartet included the top 4 fastest qualifiers through the Time Trial with Sellier and Mendes being joined by Nikolai Ho (Braves) and Ryan Chin (Breakaway). There were no surprises when the youngster rounded the last turn in the lead as he “wheelied” his way across the finish line to cop first place. Mendes had no choice but to settle for second with Ho in third and Chin dropping out due to a mechanical failure.

Sellier was also the top Junior cyclist, with Dimitri Commission-Payne (Unattached) copping the top Juvenile spot and D’Angelo Harris (Sonics) the top Tinymite.  A huge turnout of Youth Development cyclists was also refreshing as they raced onto the course full of enthusiasm and excitement. Matthew Wortman (Giants) was most impressive after winning the YD U13 Category while Scott Shaw (Giants) took the YD U11 division.

Full results inclusive of Time Trial times and the Heats are available HERE. 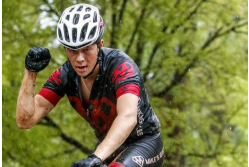