“River Raid has always been my race” said Sellier, “It is what got me started with Mountain Bike racing, and it is one that I look forward to competing in every year”.  The top 3 Open 1 men were all riding Specialized bikes, and also share the same coach, Drew Edsall.  Ryan Mendes (Slipstream) topped the 40 plus men in the Open 1 Division and also placed fourth overall.  Carolina Lugo (Global Bikas) was the first in the Open 1 Ladies Division.

Another youngster, Enrique Pablo (Heatwave) won the Open 2 Division (Sport), the 2 Lap Mountain Bike Race and captured top honours in the Under 19 age division.  Adande Piggott (MTB Kings) came second and Scott Farfan came third.  Gabriella Gooding (Fujitsu) was the first in the Women’s Division followed by Kiyomi Rankine (Rainbow Warriors) in second and Anika Walker in third.  Two youngsters opted to compete in Open 2 for the first time.  Alec Mendes (Giants), just 9 years old and Jean-Luc James-Smith (Giants), age 11 both completed the 2 lap course ahead of many adults, and should be commended for stepping up and out of their comfort zones.

The large group of Youth Mountain Bikers were separated into 2 races, and judged within their age respective divisions.
Selected Mountain Bike results on the following page.

Full results may be viewed at: http://www.odesseytiming.com/eventinfo.php?i=400 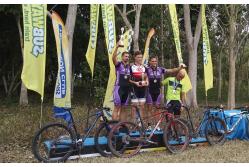