Adam Alexander (Team Foundation) started off the year in fine style after capturing the top spot at the first leg of the 2016 Road Series held this morning from Mucurapo Foreshore to Couva and return. The event, which was made possible through the sponsorship of Team DPS, saw over 120 cyclists battle for top honours.

By the time the group made the turn at Couva, Alexander, Clarke and Elcock distanced themselves from the rest as they piled on the pressure into the Central cross-winds. Elcock would win the second $500 prime also sponsored by Team DPS in the memory of Dickie.

At the back, a desperate attempt to bridge the 2 minute gap was foiled after a huge crash of over 20 cyclists occurred close to the Caroni Bird Sanctuary. Efforts to re-establish a chase were in vain after that. Alexander would ride away from Clarke and Elcock in the final kilometres to win with his right hand punching the sky. Clarke settled for second while Elcock was in third.

The mad bunch sprint that followed saw young Jabari Whiteman (Southclaine) taking fourth overall ahead of Stephen Alexander (Team Foundation) while the surprise of the morning, SPORTT Chairman, Michael Phillips (Mike’s Bikes) would close out the top 6.
Team DPS won the prime for having the most number of cyclists in the top 10 with three (Elcock, Justin Roberts and Tyler Cole).

Cole won the Juniors Category and 9th Overall while Whiteman saw the top spot in the Juveniles category with his 4th place overall. 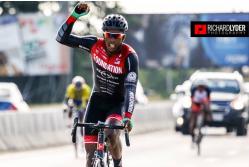