The Barbadian pair of Phillip Clarke and Jason Perryman (both of Heatwave) will be looking for top honours on Sunday morning when the Toyota Hilux Cycle Classic pedals off from Toyota’s showroom in Barataria. Clarke, the 2006 Caribbean Road Champion also placed second at the Barbadian National Championships in April this year and will be looking for the support of his countryman Perryman to see him over the line first.

As luck will have it, the last time there was a road race down the Solomon Hochoy Highway, Clarke was the victor when the Diego Martin to Debe Road Race on Easter Sunday was hosted. It is also expected that Clarke will also be one of Barbados’ hopes to take glory at the Caribbean Road Cycling Championships later this year in Barbados.

T&T’s hope for Sunday will lie on National Road Champion, Gevan Samuel (The Braves) to upset the Bajan invasion. Samuel who recently came off of a successful National Road Championships, winning gold, silver and bronze in the Road Race, Road Time Trial and Criterium respectively, will be looking to build on his recent form.

With the likes of Akil Campbell (Sonics), Jovian Gomez (PSL) and Gavyn Nero (Team DPS) all departing our shores on Saturday to compete at the Pan American Track Cycling Championships, all local eyes will be tuned into young Samuel. Ramon Belmontes (Team DPS), triple National Junior Champion, will also be fancying his chances in the Open category as the youngster will look to upset the favourites. 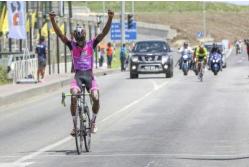