Battle for National Road heats up

The anticipation for the final National Championship event of the year is quietly building throughout the cycling fraternity. With over 120 cyclists registered to compete at the National Road Championships, it is already gearing up to be one of the most mouth watering contests in recent times.

Returning citizens from Canada and the USA have already touched down onto home soil as final preparations are implemented; simply leaving fine tuning to be executed.

The National Road Time Trial, Road Race and Criterium Championships take place on the 15th, 16th and 23rd August respectively. The first event, the National Road Time Trial will be held on a brand new course; the new extension of the Solomon Hochoy Highway between Oropouche and Mon Desir. The new course adds the challenge of some tricky rolling hills, crosswinds and the unfamiliarity of most cyclists to the course.

The following day will see all age groups tackle the Tortuga Circuit with a hill top finish at Pepper Hill in Gran Couva. The challenging 20km circuit will truly perform the proverbial separation of the sheep and goats.

Finally, the 23rd will see the Naitonal Criterium being held for the first time at the Brian Lara Stadium Car Park. The venue, which hosted two Criterium League events earlier in the year, features its own obstacles and difficulties which can set up the race for anyone to be crowned champion.

Last year, The Braves Cycle Club dominated the Elite Men category with Gevan Samuel copping a double in the Time Trial and Road Race while Gavyn Nero was the Criterium champion. This year however, Nero has switched clubs, and is now under the guidance of Ashton Williams of Team DPS. Also throwing himself into the frey is 2014 double Caribbean Junior Champion and 10x National Junior Champion for 2014, Akil Campbell (Sonics) who is competing in his first National Road Champs as an Elite. With names also such as James Hadeed (Heatwave), Guy Costa (Heatwave), Jovian Gomez (PSL) to name a few as well within the title hunt, the race is wide open for anyone's taking.

Who knows if we will see any reigning Champions retain their title or will new Kings and Queens be crowned over these three days? 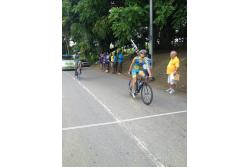