Jyme Bridges (Team DPS) made good on his intentions when the won the OWTU sponsored Rienzi Cycle Classic for the second year running, winning in a time of 1:57:48. Bridges caught the early break as the peloton sped down the Mosquito Creek when he, last year’s 2nd place overall cyclist, James Hadeed (Heatwave) and Bridges’ teammate, Tyler Cole (Team DPS) formed a three-man break.

The trio remained a close knit group as they maintained a steady lead until they were passing through Erin where the youngster, Cole was shaken from the two. Soon enough, the Antiguan, Bridges was racing solo towards the finish line with his hands punching the sky with his time almost a minute faster than last year’s effort.

As the bunch came over the final climb, a mad sprint to the line ensued. “Mr. Consistent” himself, Jabari Whiteman (Southclaine) eased past his senior counterparts to win the bunch sprint and capture 2nd place overall. The ever dangerous Phillip Clarke (Barbados) was in third while Marc Pogson (Heatwave) and Thireef Smart (Petrotrin) rounded out the top 5.

Whiteman’s exploits also saw him climbing to the tier of the podium in the Juvenile Men category, just ahead of yet another talented youngster, Enrique de Comarmond (Heatwave). Ronell Woods (Team Woods) was the pick of the lot in the Junior Men while Teniel Campbell (Team DPS) captured the Elite Women top prize. 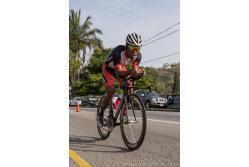