After a huge 12-man break formed while heading past Chaguanas during the first half of the race with danger men such as Jyme Bridges (Team DPS), Marloe Rodman (PSL), Rafael Meran (Team Foundation), Jamol Eastmond (Heatwave) etc, the race was already sewn up. By the time the lead group turned at Couva, a two-minute gap already formed even though the chasing bunch tried valiantly to bridge the gap.

The likes of Phillip Clarke (Barbados) threw the hammer down along the Churchill Roosevelt Highway/ Beetham Highway as the lead 12 measured speeds in excess of 60km/h and by the time they were near Barataria, Kelly (Team Econo-Car) and Ismael Sanchez (Team Foundation) began to suffer under the heat of the early morning sun and the pace set by the lead bunch as cyclists began to “yo-yo” themselves off the back the bunch.

Traversing through Woodbrook to get to the finish line at Mike’s Bikes on Ariapita Avenue, it was a frantic sprint to the finish with Bridges saving his best for last. The DPS rider, on the far right of the road defeated his counterparts by approximately 1.5 bicycle lengths as Marloe Rodman snatched second, Norlandy Sanchez (Team Foundation) in third, Jamol Eastmond in 4th and Phillip Clarke securing 5th. The 2nd to 5th positions were so close, they required the photo-finish in order to separate them. 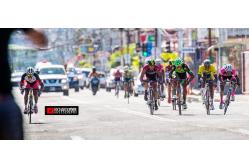