It was familiar faces atop the podium this morning in Oropouche when the 2016 National Road Time Trial Championships pedaled off. After torrential downpour, the weather held up allowing for some quick times over an undulating and challenging time trial course.

Akil Campbell (Team DPS) successfully defended his National Championship title in the Men’s Road Time Trial after clocking a blistering time of 49:22.95 at an average speed of just about 44km/h. In second, repeating his silver medal performance from 2015 was Gevan Samuel (The Braves) in 50:32.60 while James Hadeed (Heatwave) stepped one place higher into third in a time of 52:08.95.

Tyler Cole (Team DPS) as well doubled up with a Road Time Trial title after clocking a hot 34:20.60, some three minutes ahead of his closest rivals in Lorenzo Orosco (Breakaway) and Ronell Woods (Team Woods).With only three tenths of a second separating them, Orosco was just faster than his Team Woods’ counterpart in Ronell Woods.

In the Juveniles, it was Jabari Whiteman (Southclaine) at the top of the podium in a time of 16:07.85 while Enrique de Comarmond (Heatwave) was hot on his heels in a time of 16:31.21. Darius Beckles (Open Road Challenge Accepted) snatched bronze ahead of Adam Francis (The Braves) in a time of 18:34.05).

Derek De Gannes (The Braves) was most impressive in the Masters 55-59 category after he was clocked 16:37.38 while the best efforts of Stephen Aboud (Unattached) couldn’t close the 2 minute gap that De Gannes had on him. Raphael Figueira (Breakaway), Douglas D’Abadie (Team SR), Dirk Tidd (Knights FR), Jeffery La Fond (Southampton) and Peter Hernandez (Hummingbirds) were all victorious in their respective age groups. 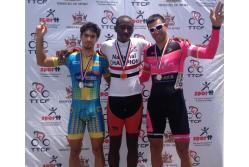