Call him King Akil! Former double Junior Caribbean Champion, Akil Campbell (Sonics) made his name known this morning as he ascended to the top tier of the podium after taking the National Individual Time Trial title for the Elite Men. Campbell, circled the 13km circuit three times in 55minutes & 41.84 seconds (55:41.84) to dethrone defending Champion, Geval Samuel (The Braves) into second who clocked a time of 57:28.78. Jovian Gomez (PSL) picked up third in a time of 57:44.56, a fraction of a secon faster than 4th place James Hadeed (Heatwave) who clocked 57:44.81.

Ramon Belmontes (Team DPS) continued his form from the Junior Caribbean Championships last week to take the Junior Men title in a time of 39:49.22, one minute ahead of his nearest rival, Nicholas Paul (Unattached). In the Juvenile Men, the mouthwatering battle between Tyler Cole (Sonics) and Jabari Whiteman (Southclaine) continued as the double Junior Caribbean Champion, Cole took top honours in 18:51.09, a mere 8 seconds ahead of Whiteman.

The double Junior Caribbean Champion in the Junior Women, Teniel Campbell was the lone entrant in her category, yet still produced an impressive time of 22:24.96.


Image courtesy RL Photography - For more images, check them out at www.richardlyder.com or www.fb.com/RLPhotographyTT 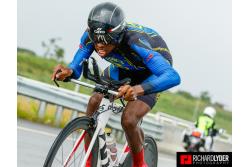