Akil and Teniel Campbell (Team DPS) showed their superiority on the road last night when they both captured the Elite Men and Elite Women National Criterium Titles at the Rienzi Kirton Highway in fine style.
The younger of the two, Teniel, broke away from the bunch early in her race with only Tonya Sun Kow (The Braves) able to hold on. As they entered the final straight in front of SAPA, Campbell was a clear winner with Sun Kow in second and Amy Ramcharitar (Southampton Wheelers) in third.

In the main event of the night, the Elite Men circled the 1.8km circuit fifteen times and from the blow of the whistle, Akil Campbell made his intentions known. He immediately had the bunch in single file as they scampered to try to connect. The attack was quickly quelled by Gene Samuel (The Braves). It was not long again before Campbell leaped out of the bunch, carrying Marc Pogson (Heatwave) and Gevan Samuel (The Braves) with him with 13 laps remaining.

The trio would open an unassailable lead with only Guy Costa (Heatwave) coming within any close margin to the leaders. With 4 laps remaining, Campbell made his most decisive move for the night, a sleek attack on the inside that left Pogson and Samuel without any answers. Campbell’s form was evident as he was able to easily cross the line with both hands punching the air. Pogson would have the better kick to take home silver while Samuel had to settle for bronze.

The National Time Trial will be hosted on Saturday 6th at Oropouche from 7:00am 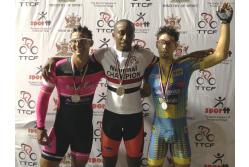