Phillip Clarke (Heatwave) made good on his intentions to take the TT$2,000 first prize at the Toyota Hilux Cycle Classic on Sunday morning after winning the event in just over 2 hours time. From early, Clarke distanced himself with Peter Thompson (Braves), Gevan Samuel (Braves) and Jymes Bridges (Team DPS) as the Caribbean flare was evident in the break.

With one cyclist each from Barbados, Jamaican, Trinidad & Tobago and Antigua & Barbuda, it felt as though it was a prequel to the Elite Caribbean Championships to be held in October. As the lead group rounded the last corner, it was Clarke who sprinted away with his arms punched to the sky to take top honours ahead of Bridges, Thompson and Samuel.

Chasing this group of four (4) was a youthful trio of Andrew Hicks (Sonics), Romello Crawford (PSL) and Jabari Whiteman (Southclaine). Hicks, a Guyanese, outsprinted his competitors to take 5th overall and the Junior title as well. Hicks’ countryman, Crawford, settled for 6th overall and 2nd in the Juniors while Whiteman of T&T was the top Juvenile and 7th overall.

Christiane Farah (PSL) topped the Women Open category while Mark Hosein (PSL) was the top cyclist in the Masters 40-49 category. The 92km event which started and finished at the event's sponsor compound, Toyota in Barataria, attracted a sizeable number of cyclists. The sweltering heat and humid conditions definitely affected cyclists as only the best were able to complete the entire event.

The TTCF will like to thank Toyota Trinidad & Tobago Limited for partnering with us to ensure that your event was successful and well enjoyed. 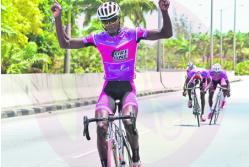