With this medal haul, T&T tops the medal tally and thus will also be named the Most Outstanding Country for the tournament.

One must not forget the great contribution also provided by Nicholas Paul, Sidney Joseph, Emmanuel Watson, Kemp Orosco and Ronell Woods to the entire contingent.

Kudos must also be extended to the Management Staff who have worked tirelessly with this team for the past two months on a totally voluntary basis. Even with the late notice of the Championships' dates, Team Coach - Ashton Williams, Team Manager - Joseph Charles-Walcott and Team Mechanic - Kevin Tinto worked several times per week with the team and the results are simply fruits of the team's labour.

The contingent is due to return to Trinidad around midnight tomorrow night, therefore, we wish them a safe journey home so that we can also celebrate with you.

Once again, the TTCF extends their congratulations to our champion team! 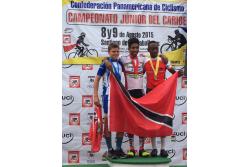