Tyler Cole and Teniel Campbell both stepped atop the highest tier on the podium Saturday morning in the Dominican Republic after convincingly capturing their respective age group titles at the 2015 Junior Caribbean Road Cycling Championships.

Cole got T&T off to a great start after winning the Road Time Trial for Juvenile Men in a time of 13minutes & 55 seconds to beat his competitors from Bermuda and Puerto Rico into second and third respectively. Jabari Whiteman was also impressive in 6th place overall on his National debut.

Campbell continued with T&T's gold snatching after she too topped her category, Junior Women, Road Rime Trial in a time of 24minutes & 54 seconds, edging out Curacao and Puerto Rico into second and third. .

Ramon Belmontes ensured that T&T were on the podium for all three categories on Saturday morning after he captured Bronze in the Junior Men Road Time Trial. Nicholas Paul was also in a commendable 10th place in the Junior Men category as Curacao and Puerto Rico took the second and first places respectively.

Tomorrow morning, the Road Race will pedal off with Cole alongside Whiteman, Kemp Orosco and Ronell Woods lining up in the Juvenile Men category . Campbell will be the our lone entrant in the Junior Women category while Belmontes, Paul, Sidney Joseph and Emmanuel Watson will compete in the Junior Men category. 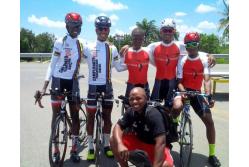