The two experienced junior cyclists, will be leading a team which also includes Nicholas Paul (Junior Men), Emmanuel Watson (Junior Men), Ramon Belmontes (Junior Men), Sidney Joseph (Junior Men), Jabari Whiteman (Juvenile Men), Kemp Orosco (Juvenile Men) and Ronnel Woods (Juvenile Men).  For the past 2 months, the team has been under the stewardship of Team Coach, Ashton Williams who has expressed his delight in the work ethic and performances he has been seeing during their regular training sessions.

The team will also be accompanied by Joseph Charles-Walcott (Team Manager), Kevin Tinto (Team Mechanic) and Jinelle James (Chaperone). The TTCF will like to wish the best of luck to our Junior Caribbean Team! 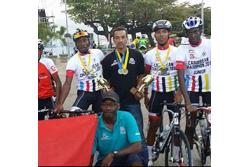