16 year old Tyler Cole continued his fine form to take the curtain event for the 2016 racing season in Trinidad & Tobago when he crossed the line first at the Leslie King Memorial event on Sunday. The event, sponsored by PSL, saw cyclists travel from Nestle Compound on the Churchill Roosevely Highway through Sangre Grande and Manzanilla while finishing in front of the BP Mayaro Resource Centre.

Cole along with seasoned cyclists Philip Clarke (Knights FR), Guy Costa (Heatwave) and Vicente Sanabria (The Braves) separated themselves from the peloton as they raced through what is commonly called the “Coconuts” along the Manzanilla stretch. In the end however, the teenager was too fast for his counterparts, beating them in the sprint with Clarke, Sanabria and Costa taking 2nd to 4th. Costa’s teammate, Jamol Eastmond claimed 5th while last year’s third place overall winner, and yet another teen sensation, Jabari Whiteman (Unattached) was in 6th. Jyme Bridges (Team DPS) and Adam Alexander (Team Foundation) were in 7th and 8th.

Teniel Campbell (Team DPS), the reigning Elite Caribbean Champion, continued her dominance and overall sweep of all Elite Women endurance events for 2016 with yet another win in her category. Sisters, Jessica and Alexi Costa also climbed onto the podium after finishing 2nd and 3rd respectively. 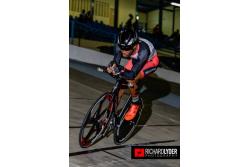