Tyler Cole continued to add to his dominance in the Junior Men Category throughout the Caribbean after he notched his fourth Junior Caribbean Championship title in three year on Saturday afternoon in St. Lucia when he captured the Junior Men Road Time Trial.

Jabari Whiteman repeated his heroics of 2015 when he captured Bronze in the Road Time Trial for Juvenile Men. Whiteman was clocked in a time of 15:44.75, just three tenths of a second slower than second place and 16 seconds off of Gold. National Team debutant, Enrique De Comarmond was also impressive with a fourth place finish in the Juvenile Road Time Trial in a time of 16:09.44.

Cole and Woods will compete in the Junior Men Road Race on Sunday with Sidney Joseph and Nathan Alexander joining them, while Whiteman and de Comarmond will team up with Darius Beckles and Zion Pulido in the Juvenile Men Road Race. 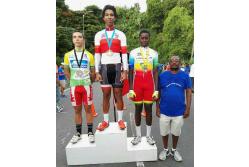