Jyme Bridges led a Team DPS 1,2,3 sweep at the final leg of the 2017 Road Series on Sunday morning after the Antiguan showed impressive climbing skills through the Central Range. The race however started with Akil Campbell (PSL) breaking from the drop of the flag at the Brian Lara Cricket Academy entrance and quickly opened a 1 minute gap.

As the bunch turned onto the northbound lane at Ghandi Village, a Heatwave train ramped up the speed to reel the PSL cyclist back into the bunch by the time they passed the Gasparillo flyover. Campell would once again break free on the Southern Main Road along with Adam Alexander (Team Foundation) and Enrique De Comarmond (Heatwave) but once again it was short lived as Bridges and company caught the trio climbing through Brasso.

As they made the turn into the Piparo Road a group of eight consisting Bridges, Campbell, De Comarmond, Alexander, Tyler Cole (Team DPS), Kemp Orosco (Team DPS), Jabari Whiteman (Heatwave), Gevan Samuel (The Braves) and Jamol Eastmond (Heatwave) were all together until the first ascent of the 2km climb to the finish line. Bridges showed his strength to ride away initially with Eastmond while Whiteman and Orosco were in close pursuit. The Elite Men and Junior Men completed a 7.5km loop two times, ascending the final climb on two more occasions.

In the end however, Bridges finished in just over 3 hours and 19 minutes while Junior cyclists, Tyler Cole recovered to grab second and Kemp Orosco grabbed third; 43 seconds and 60 seconds later respectively. Enrique De Comarmond, the Juvenile cyclist from Heatwave was in an impressive 4th while reigning National Elite Road Champion, Gevan Samuel rounded out the top 5.
Even with the heroics of DPS however, Jabari Whiteman topped the Overall Series comfortably over the four events with 24 points with his closest competitor being Philip Clarke (Knights FR) on 17 and Tyler Cole on 15 points.

Teniel Campbell (PSL) was once again a dominant force, winning the Women Open division in both the Series Finale and the Overall Standings. Rodell Woods (Team Woods) snatched the Juvenile Men category with a smart victory in the Finale while Mark Hosein (Breakaway) was the Masters 40-49 victor. In the Masters 50-59 category, regardless of his spill in the Finale, Michael Brown (Christian Wheelers) was still able to hold on to the overall win with Cyril Fook (PSL) comfortably taking the Masters 60-69 category. 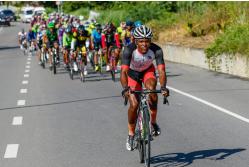