Barbados’ cyclists continued to enjoy the spoils in T&T when the first leg of the 2016 Crit Series pedaled off at the Diego Martin Highway on Sunday morning. The event, sponsored by Mikes’ Bikes saw races for cyclists from as young as 5 years old to those exceeding the age of 70 as they all toiled in the early morning heat in Diego Martin.

The 1.8km circuit with two 90 degree hair pin turns proved to be too difficult for most as a bunch starting with 50 in the final event (45 mins + 2 laps) finished with only 12 cyclists. The high intensity pace set by Russell Elcock for the first 15-20 minutes was contributory to the early exodus of cyclists as the leader of the Road Series looked to be working for his teammates instead. Phillip Clarke (Unattached) and Jamol Eastmond (Heatwave) won two $200 primes each on the way to Eastmond claiming his first scalp of the year.

Earlier in the morning, Jovian Gomez (PSL) won the 3 Laps for Elite 1 & 2 comfortably ahead of a consistent Jymes Bridges (Team DPS) and Phillip Clarke (Unattached). Kirk Hearn (Slipstream) rode away with the victory in the Elite 3&4 Category with Nikolai Ho (The Braves) and Dominic Guevara (Hummingbirds) rounding out the top 3.

Also, check out some awesome footage captured by Desron Clarke and Nikolai Ho 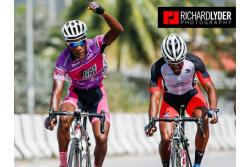