Team DPS’ Russell Elcock out of Barbados snatched a huge win this morning on a windy course in South Trinidad. Elcock, defeated his Barbados counterpart, Jamol Eastmond (Heatwave) in a sprint finish in front of the Brian Lara Stadium, Tarouba after a challenging 113km (70mile) circuit which took cyclists between Ghandi Village and Claxton Bay three times.

Much like Road Series #1, within the first 20km, Elcock found himself once again in a dangerous break along with Varun Maharajh (Sonics), Jamol Eastmond (Heatwave) and Phillip Clarke (Unattached). The sole Trinbagonian in the break, Maharajh would be dropped from the leaders at the halfway stage as the trio of Bajans piled on the pressure into the central cross winds. As they neared the last 500m along the Gasparillo By-Pass Road, it was a flat out sprint between Elcock and Eastmond.

The 2015 Caribbean Road Time Trial Bronze medalist’s exuberance with the win was evident as he punched the air with his right fist while screaming to the top of his lungs in excitement. His victory came in a time of 2:48:21 (two hours, 48 minutes and 21 seconds) at an average speed of just about 40km/h.

Elcock’s Team DPS teammate, Jymes Bridges of Antigua & Barbuda sealed a DPS 1,3 finish as he steered off Clarke to the finish line. Stephen Alexander (Team Foundation) was the first T&T cyclist to finish in 5th, 3minutes behind the winners while Elcock now moves four (4) points clear in the Road Series standings ahead of Clarke on 10 and leg #1 winner Adam Alexander in third on 9.

Tyler Cole (Team DPS) was a cut above the rest in the Junior Men category, defeating second place Lorenzo Orosco (Breakaway CC) by over 4 minutes while Jabari Whiteman (Southclaine) outsprinted Enrique De Comarmond (Heatwave) to take the Juveniles event which travelled a shorter distance of 75km.

Teniel Campbell (Team DPS) continues to impress with a strong win in the Women Open category while the battles in the Masters 40-49 and Masters 50-59 categories are heating up with just one point separating first and second in each category. The TTCF will like to express our gratitude to Breakaway CC for sponsoring this event and ensuring that all of our cyclsits get the competition that they need. 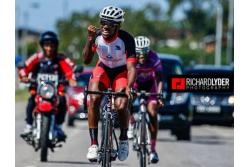