After recently announcing his retirement from competitive cycling, multiple National Champion, Emile Abraham will be looking to ride off into the sunset with a podium finish this weekend when he adorns himself one last time in the red, white and black.

The 41 year old Tobago native whose career spans some 30 years, is one of the, if not the most successful Road/Endurance cyclists from the twin island republic. His highest moment being a Silver medal at the 2007 Pan American Games.  8 years ago in Rio de Janeiro, Abraham basically competed without a team against countries from throughout the Americas yet still pulled off an amazing silver medal feat.

At his swansong race, the Caribbean Elite Road Championships, Abraham will now have the support of a strong team. Accompanying Abraham to Barbados this weekend is National Time Trial Champion and standout athlete for the year, Akil Campbell, National Road Race silver medalist, Joshua Alexander and National Road Race bronze medalist, Sheldon Ramjit. National Road Race Champion, Gevan Samuel was previously selected to the team but had to withdraw due to injury. Also representing T&T will be lone female representative Christiane Farah. 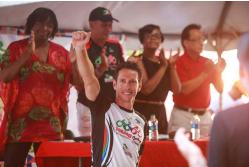