Colombian, Javier Gomez struck a double blow on Friday night when he captured both the 4 Lap and 25 Lap Main Event in the International Men category as the Southern Games Criterium took centre stage in the southern town of Marabella.

In front of a packed and entertained crowd, Gomez broke free from the bunch in the opening race with the perennially dangerous Marloe Rodman (Jamaica) and T&T’s very own Jabari Whiteman. Whiteman, who only returned the night before from a one month training stint in Wales and still only 16 years old, held his own on the break. In the sprint however, Gomez would take the top prize with Rodman in second and Whiteman in third.

The women category was once again won by none other than Teniel Campbell (PSL) with Christiane Farah (Breakaway CC) in second and Tonya Sun Kow (Braves) in third while Raphael Figueira (Breakaway) copped the Masters 40-49 category.

The National Team, made up of three Junior cyclists with Whiteman, Enrique de Comarmond and Lorenzo Orosco, showed that the TTCF are focused on developing our youth cyclists by giving them the necessary exposure to high level cycling. The trio combined with the experience Adam Alexander worked diligently in the Main event as they chased and kept the pack together for the majority of the race.

With only two laps remaining however, Gomez managed to break free once again as he and Jyme Bridges (Team DPS) opened a 10 second gap on the bunch. Gomez would win the final sprint with Bridges in second while Whiteman featured as he copped the bunch sprint ahead of Jamol Eastmond (Heatwave), Joshua Alexander (Team Foundation) and Adam Alexander (Trinidad & Tobago). 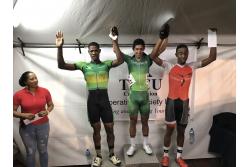