Heatwave CC had a great day through the “coconuts” in Manzanilla on Sunday when they walked home with the Leslie King Memorial, TTCF Road League Open and TTCF Road League Top Club titles. The main orchestrator of the titles came from an in-form James Hadeed.

As the bunch left Sangre Grande, Thompson, Nero and Hadeed leaped out of the pack and never looked back while Hadeed looked the most comfortable as he easily ascended the rolling hills before entering. the Manzanilla stretch. This proved to be right when he and Nero left Thompson, who faded quickly.

As they entered the last 200m, a flat out sprint ensued between the leading two. Unfortunately for Nero, he fell with 100m remaining, seeing Hadeed cross the line with hishands punching the sky in a time of 2:11:59.

Nero later explained that fatigue had truly set in at the moment of the sprint seeing him lose control of his bicycle, however, he was able to get up and cross the line some two minutes later. Speaking with the TTCF after, Nero commented, “James was really comfortable throughout and deserved the win. I had some trouble going through the coconuts and my leg just locked up on me as soon as I got up to sprint.”

Young Jabari Whiteman (Southclaine) won the sprint of the chasing pack to capture third in a time of 2:15:36 while Bridges and Eastmond settled for fourth and fifth respectively.

The win saw Hadeed take the Leslie King Memorial and as well the 2015 TTCF Road League which the event also doubled as the curtain event for same. Hadeed’s first and Eastmond’s fifth gave Heatwave sufficient breathing ground for them to take the Overall Club title with 49 points ahead of Team DPS on 36 and The Braves on 12. 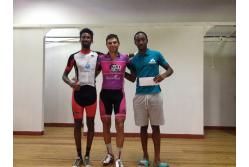