The prize podium was all pink on Sunday morning at the end of the Siparia Fete Road Race in the southern town after Jabari Whiteman, Edwin Sutherland and Jamol Eastmond swept the top three positions. Tyler Cole (Team DPS) broke the streak after securing fourth with young Enrique De Comarmond (Heatwave) notching yet another position for the Guy Costa led outfit.

From the early onset of the event which was hosted by the Siparia Regional Corporation in conjunction with the Rigtech Sonics CC, a six man break consisting of the eventual top five finishers and Kemp Orosco (Team DPS) made their way away from the bunch. As the break neared Point Fortin after leaving its start point in Siparia through Avocat, Othaheite and La Brea, Sutherland was successful in breaking free. Standout Junior, Jabari Whiteman decided to give his teammate some company in the lead as he rode away from the now chasing group as they passed through Cap de Ville. 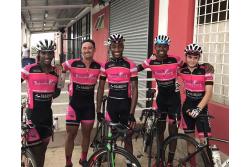