Junior team off to St. Lucia

Cole, who will now be competing as a Junior, had a good warm up after placing second at the John T Memorial in Anguilla two weeks ago and then snatched a bronze in the 15km Scratch Race at the brand new National Cycling Centre over the weekend. Bronze medalist in the 2015 Juvenile Road Race, Jabari Whiteman has also shown great form throughout 2016 and proved this with a convincing win at the Roger Smart Memorial Sprint Time Trial, defeating some of the Caribbean’s best Elite Road cyclists.

Making their National Team debut are Enrique de Comarmond, Zion Pulido, Nathan Alexander and Darius Beckles. de Comarmond has also been impressive this year and as well showed some good form at the Roger Smart Sprint Time Trial. Sidney Joseph and Ronell Woods will be making their second appearance in the Red, White and Black and are keen on stepping onto the prize podium.

Cole, Whiteman, de Comarmond and Woods will be competing in the Time Trial on Saturday while the entire contingent will race in the Road event on Sunday. The Trinidad & Tobago Cycling Federation will like to wish the best of luck to the team! 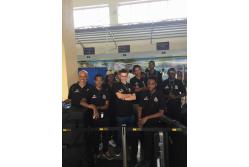