Anne Frank, in the Diaries of a Young Girl was quoted as saying “The weak fall, but the strong will remain and never go under!” This simple but impactful quote beautifully summarizes the courage and fortitude that young Keiana Lester has displayed within the past few weeks. That strength was rewarded when Lester was discharged from the San Fernando General Hospital, twenty-five (25) days after being involved in a head on collision with a vehicle during a training ride on December 10th.

After suffering serious injuries to her neck, face and hip following the crash in Buenos Ayres, Lester was in a critical condition and warded at the Intensive Care Unit (ICU) at SFGH. After showing great improvement and regaining consciousness two days after the collision, doctors were optimistic that the Junior Pan American record holder in the Team Sprint will be able to leave the hospital in 6-8 weeks’ time.

That time frame would have seen Keiana possibly being released at the end of January. However, after spending Christmas and New Years with family and close friends at her side, she received a late Christmas present when doctors informed her that she would be released from hospital three (3) weeks in advance than initially projected.

The Arima native left the hospital in a wheelchair and sporting a neck brace, destined for the Eastern borough and carrying a broad smile as she exited the hospital at about 2:30pm on Wednesday afternoon. Though discharged, Lester will remain an outpatient of the SFGH as she begins her journey to full recovery.

The TTCF continues to pray and wish for Keiana’s health to maintain its steady improvement and we hope to see back on her bike in the shortest possible time. 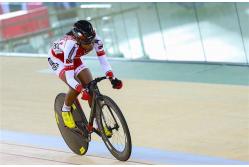