Returning to T&T on Tuesday night, Varun Maharajh overcame two mechanical mishaps to ride away with a convincing victory at the Michael Phillips Republic Day Classic at the Nelson Mandeal Park on Thursday.

The annual spectacle attracted huge crowds of spectators and cyclists hungry for cycling action. None could disagree that they all left with their appetites satisfied. The main event of the day, 35 laps for Elite 1, 2 and Invitational was star studded with cyclists from 12 different countries. Halfway through the race, Maharajh was met with a disaster when his left crank came loose from his bike. With a one lap grace provided for mechanical difficulties, Maharajh was able to rejoin the race and then make a daring attempt to get break free from the peloton in chase of the lead group.

With a lead of 7 riders approximately 45 seconds ahead, Maharajh once again suffered difficulties when he had to change his backwheel due to a puncture. Again, the Arima native was able to return to the bunch and then launched an attack that none could chase. Maharajh would cross the line with both hands raised to take the top prize. Rushing in for second and third was Team Foundation’s Norlandy Salazar and Rafael Meran respectively while Marloe Rodman (PSL) rounded out the top 4.

In yet a similar ride which raised many eyebrows was Tyler Cole’s come from behind victory. The Sonics rider received a puncture which took approximately a lap and a half to change. Meaning, Cole was half a lap down on the leaders. In an amazing feat, Cole dug deep, reconnected with the leaders and outsprinted them to the finish line. Jabari Whiteman (Southclaine) was also impressive in the Juvenile Men while Teniel Campbell (Sonics) topped the Senior Ladies bunch. 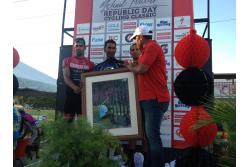