The Brian Lara Stadium car park will be transformed into Criterium central from 1:00pm on Sunday afternoon as the nation’s best road cyclists merge to fight for National glory once again, this time at the National Criterium Championships. The final National event for the year will feature a 35 lap Criterium event for Elite Men and defending National Champion, Gavyn Nero (Team DPS) is eager to defend his title.

About this time last year, Nero crossed the finish line at the Nelson Mandela Park (formerly King George V Park) with his right hand clenched, punching the air after a triumphant win. This year, the change of venue opens the race for anyone.

The Brian Lara Stadium Car Park features a slight incline within the last 300m of the race as cyclists will be sprinting into a headwind. It’s not the easiest Criterium finish but the sweeping corners also allows to fast getaways.

Road Race and Time Trial Champions, Gevan Samuel (Braves) and Akil Campbell (Sonics) will also be looking to getting onto the podium as the start list of close to 30 Elite Men cyclists will be keenly contested. With Campbell now promoted into the Elite ranks, the Junior Men category is wide open as the in-form  Ramon Belmontes (Team DPS) looks to make it three out of three National Road titles but not if the likes of Nicholas Paul (Unattached) and the hidden surprise of Joshua Ho (Slipstream) has anything to do about it.

Tyler Cole (Sonics) will be continuing his intense battle with Jabari Whiteman who will have home court advantage as the Southclaine cyclist trains at this venue on a regular basis.

The day promises to have several mouth-watering clashes as over 100 cyclists have registered to place their bikes on the start line in 15 categories for the National Criterium Championships. 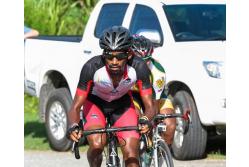