Marc Pogson (Heatwave) and Teniel Campbell (PSL) captured the Elite Men and Elite Women categories respectively when the 2017 National Criterium Championships rolled into the Wallerfield International Raceway on Sunday afternoon. Even though the skies threatened for most of the evening, weather conditions were cool and calm, setting up ideal racing conditions.

Earlier in the racing program Pat Nelson (Breakaway) took a sprint finish in the Masters 70+ while Stephen Aboud (Unattached) rode away with the Masters 60-69 category. The Masters 50-59 was highly contested as a mad dash for the line was won by a speedy Rodney Woods (Team Woods), pipping Wayne Samuel (Hummingbirds) on the line.

Breakaway CC swept the Masters 40-49 category when David Tardieu, Raphael Figueira and Mark Hosein took the top three spots while Ryan D’Abreau (AWCC) won the Tinymite Men category. D’Abreau timed his jump perfectly to overtake a hard working Benjamin Mouttet (Breakaway) after the two broke free early in the race. Mouttet worked diligently to ensure that the lead remained intact but it was D’Abreau who had more left in the tank at the final sprint.

Makayla Hernandez (Madonna Wheelers) completed her trifecta of Road wins in the Tinymite Women category as she defeated Keira Ellis (Team Woods) in their 3 lap event. Enrique De Comarmond (Heatwave) followed suit to win his 3rd National Road Title for the Juvenile Men this year while Jabari Whiteman snatched the grueling Junior Men category ahead of Kemp Orosco (Team DPS) and Michael Ackee (Southclaine) in yet another sprint for the line.

Teniel Campbell continued her dominance in the Elite Women category as she showed her strength to pedal away from the bunch and cross the line as yet another National title. Alexi Costa (Heatwave) closely followed the PSL cyclist while Tonya Sun Kow (The Braves) was in third.

The main event of the day saw a Heatwave 1,2,3 for the Elite Men after Marc Pogson and James Hadeed broke free early in the race. After falling and rejoining the race, the indelible Guy Costa leaped out of the bunch and eventually joined his two teammates. The trio would go ahead to lap the remainder of the Elite Men bunch with Pogson riding away within the last few minutes.

The TTCF will like to once again thank TTASA for allowing us the use the of the facility at Wallerfield and we hope to continue the relationship that we have started with more events to come at the venue. 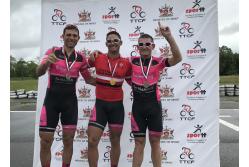