Jose Luis Rivera (ARG) showed his worth in the main event, 20 Laps for International Men and Invitational at the Southern Games Criterium in Marabella on Friday night. As the streets were lined with scores of spectators, Rivera broke free from the bunch with just 2 laps completed and never looked back. Valiant attempts by Mendoza (COL) and Akil Campbell (TTO) were futile as the Argentine continued to open the gap on the chasing bunch.

It was only Antonio Torres (CHI) who was able to leap from the bunch and successfully bridge the gap to Rivera, catching him with just 1 lap remaining. Rivera would take the win at the end leaving a mad sprint to the finish for the remainder of the bunch in the battle for bronze. Young Tyler Cole on his Senior National Team debut outsprint Marloe Rodman (JAM) for third, leaving the Jamaican to settle for fourth.

In the first event of the night, Akil Campbell was a comfortable winner over Rivera in the International Men – 4 Lap event while Hilliry Sayedra (COL) defeated Teniel Campbell (Team DPS) in a sprint finish for the Elite Women.

Nicholas Paul (Breakaway) continued his domination in the Junior Men category while Jabari Whiteman (Southclaine) followed in the same vein for the Juvenile Men. Expected names such as Rocky Hosein (Hummingbirds), Rodney Woods (Team Woods) and Cyril Fook (PSL) all stepped to the top tier of the podium in the Masters 40-49, Masters 50-59 and Masters 60+ categories respectively.

The Grass Track cycling of the Southern Games will take place on Sunday 13th March, 2016 from  1:00pm at the Guaracara Park. 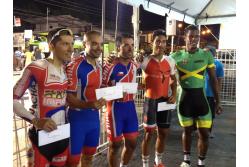