Gevan Samuel (Braves) made it a hat-trick of National Road Race titles when he captured the grueling 147km National Road Race this morning for Elite Men. The defending Champion had his main competitor, Akil Campbell (Team DPS) attacking at almost every opportunity as the peleton left the start/finish line at Brian Lara Stadium and climbed through the hills of the Central Range.

Campbell, the new National Time Trial and Criterium Champion was able to break free by himself and as they returned to the start/finish line with approximately 98km remaining, he opened a 35 second lead. Campbell would be reeled in by a bunch containing Samuel, Guy Costa (Heatwave), James Hadeed (Heatwave) and Collin Wilson (Braves). As they ascended once again through the Central Range, Campbell and Samuel distanced themselves from the remainder of the peloton and took the bell with 49km remaining by themselves, with a comfortable 2 minute lead.

It was during the third ascension through Gran Couva when Campbell began to experience cramps in his legs, leaving the fresher of the two, Samuel to easily ride away and finish in a time of 4hours, 21minutes and 15 seconds. Campbell would secure Silver just under 2 minutes behind, while Costa was in third.

Teniel Campbell (Team DPS) completed her three-peat of National Road titles for 2016 as she convincingly captured the Elite Women's crown this morning. Campbell (T) dispatched her closest rivals early in the race and never looked back as she completed the 98km course 3:14:26, some 14 minutes ahead of her closest competitor, Jessica Costa (Heatwave) while Cheyenne Awai (Breakaway) captured bronze.

In the Junior Men, Lorenzo Orosco (Breakaway) step atop the top tier of the podium after outsprinting Ronell Woods (Team Woods) for first while Justice Philemon (Unattached) was in third. Zion Pulido (Sonics) became the Juvenile Men champion when he too was faster than Enrique De Comarmond (Heatwave) in mad dash for the line. Both the Junior and Juvenile Men categories were without their marquee cyclists, Tyler Cole (Team DPS) and Jabari Whiteman (Southclaine) respectively as they decided to place full focus on representing Trinidad & Tobago at the Junior Pan American Track Cycling Championships in 3 weeks-time.

The TTCF will like to extend a hearty congratulations to all the new National Road Champions and as well to all the support staff who made the three events possible. 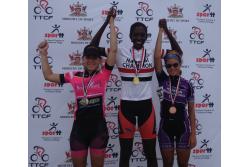