By this time, the starting field of the Elite Men whittled away to just about 15 cyclists as the humid conditions and the torturous climbs through Tortuga proved too demanding for some. Ramjit, Alexander and Samuel eventually further distanced themselves until Ramjit couldn’t keep pace with approximately 2 laps remaining (42km).

Samuel who was in fine form, rode away from Alexander in the final kilometres to finish in a time of 4hours, 4minutes and 8seconds (4:04:08) while Alexander settled for second just 24 seconds after. Sheldon Ramjit hung on for third while Guy Costa rounded out the top 4.

Ramon Belmontes (Team DPS) became a double National Champion after he secured first place comfortably in the Junior Men category ahead of Joshua Ho (Slipstream) and Nicholas Paul (Unattached). Once again, the pull and toggle for supremacy in the Juvenile Men category continued with Jabari Whiteman (Southclaine) this time around snatching the Road Race title ahead of Tyler Cole (Sonics) and Adam Francis (Braves).

Image courtesy RL Photography - For more images, check them out at www.richardlyder.com or www.fb.com/RLPhotographyTT 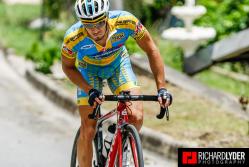