Dominican Republic’s Norlandy Sanchez (Team Foundation) was the happiest man on Ariapita Avenue on Tuesday night after successfully repeating as the winner of the main event when the annual spectacle had fans flocking to Port of Spain.

With yet another packed crowd, Jabari Whiteman (Southclaine) was the first to wow everyone when the 15 year old beat all to the line in the 200m sprint to open the event. In the 2 lap Invitational and International, Sanchez displayed his sprinting prowess to take the top prize ahead of Tyler Spurnell (PSL/Australia) and Geron Williams (Team Foundation/Guyana).

Lorenzo Orosco (Breakaway CC) did the namesake of his club. So much so, he went on to lap the main field with one lap remaining while Ronell Woods (Team Woods) was in second and Jabari Whiteman in third. Raphael Figuiera (Breakaway CC) showed some fine sprinting form to take top honours in the Masters 40-49.

All these snappy events were all appetizers to the main event, 35 laps that went in a blur! The 1.25km course was circled 35 times in just over 57 minutes time, averaging a speed of 46km/h. From the drop of the flag to start the event by the legendary Hasely Crawford, primes began to be shared every other lap. With lap prizes as much as TT$4,000 (US$600), there were mad dashes for the line consistently, keeping the fans enthused.

As they rounded the final bend, it was a flat out sprint with approximately 10 cyclists bidding for top honours. Sanchez though, would emerge from the centre of the pack with both hands punching the air while Jonathan Mould (Great Britain) and Luis Rivera (Team Econo Car/Argentain) had to settle for second and third respectively. Adam Alexander finished 5th overall and was also the first T&T cyclist to finish. 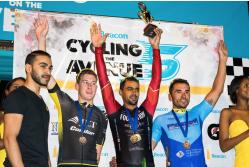