The world governing body for cycling, the Union Cycliste Internationale (UCI) has featured the Trindiad & Tobago Cycling Federation (TTCF) in their latest newsletter published this month. The November issue saw T&T being featured in the "SPOTLIGHT ON" segment as the UCI explained that over the next few editions of their newsletter theye will take a close look at some of the National Federations and the work being carried out to develop our sport in their regions.

Below is a full capture of the Spotlight On the Trinidad & Tobago Cycling Federation:

Cycling’s four Olympic disciplines as well as Cycling for All are the focus of a new four-year development strategy in Trinidad and Tobago.
The Trinidad and Tobago Cycling Federation (TTCF), presided by Robert Farrier, has the assistance of experienced professionals as it works to guide our sport into the future.

Mountain bike
There is already a solid foundation on which to work, particularly in mountain bike, which has seen a 400% increase in club membership between 2013 and 2016. This is thanks in no small part to the ideal terrain on the western peninsula of Trinidad in the picturesque tropical rainforest of Chaguaramas. However, in the last three years, new trails have been developed throughout both islands.

Result? Trinidad and Tobago will host its first international mountain bike event when the 2017 Caribbean Mountain Bike Championships stop over next September.

Track cycling
Track cycling is also on the up in Trinidad and Tobago, with club membership increasing 30% in the last two years.

Already hosts of the Easter International Cycling Grand Prix each March in the Arima Velodrome, Trinidad and Tobago’s activity in this discipline has been boosted by the construction of the Caribbean’s first indoor velodrome at the National Cycling Centre in Balmain, Couva. This broadens the horizons for cyclists not only in Trinidad and Tobago but also in the wider Caribbean, as demonstrated when T&T hosted its first ever continental event last year: the Junior Pan American Track Championships.

The country has now put in a bid to host the 2017 Elite Pan American Track Cycling Championships and aims to move onto major international events in the near future.

To meet the needs of those in the deep south of Trinidad, a new 333m outdoor velodrome has also been constructed in Siparia.

Development from a young age
Several clubs throughout Trinidad and Tobago have successfully implemented “Adopt a School” programmes that introduce children to the sport, cycle safety and the benefits of an active and healthy lifestyle. The aim is to get as many children onto bikes as possible which in turn expands the country’s talent pool.

Because the next step, in conjunction with the Sports Company of T&T and corporate T&T, is to initiate a nationwide Talent Identification programme throughout the country.

Related professions
Over the last two years, the TTCF has hosted National Commissaire courses for track, road and mountain bike. In addition, it hosted its first ever National Level 1 Mechanics Course. In 2017 the TTCF will implement quarterly educational workshops bringing together cyclists and coaches. The aim is to gain valuable input from both parties but also to focus on key topics such as anti-doping awareness and nutrition. 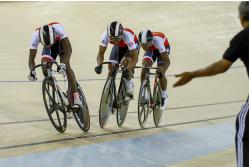