15 year old Jabari Whiteman shook off his Bronze medal accomplishments from yesterday’s Road Time Trial in the Juvenile Men Category to step onto the top tier of the prize podium for his first time at the Junior Caribbean level.

In the Juvenile Men Road Race on Sunday afternoon, the main bunch rounded the final turn all together, setting up an exciting sprint finish. Whiteman’s prowess over the past year in T&T races were replicated in St. Lucia as the young Southclaine cyclist was just too fast for his competitors, crossing the line in first.

Tyler Cole however was unable to notch another Junior Caribbean title under his belt after finishing in the bunch during the Junior Men Road Race. Reports indicate that Cole encountered an issue when his water bottled dislodged and went into his spokes. After stopping to remove the bottle, he had the arduous task of chasing to catch back the bunch. Even though he reconnected, the chase took too much out of him to be a threat at the end of the race.

Focus for both Whiteman and Cole now switches to the Junior Pan American Track Championships to be hosted in Trinidad & Tobago at the end of August.

Team T&T would now return home after a successful two day Championship in St. Lucia with two Golds and one Bronze. The team is expected to return home on Monday afternoon and the Trinidad & Tobago Cycling Federation will like to extend a hearty congratulations to Jabari, Tyler and the entire Junior Caribbean Road Team. 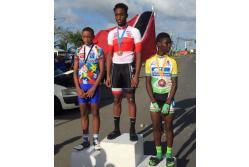