Wilson creeps away with Crit title

Collin “Creepy” Wilson upset the favourites at the Brian Lara Stadium Car Park as he captured the main event, the Elite Men National Criterium crown. In an evening inundated with brief showers, the car park of the cricket stadium was converted into criterium haven.

Over 100 cyclists flooded the venue, leaving little room to even park in the designated areas. With races for over 12 categories from Tinymites (13-14 years) to Masters 70+, the evening proved to be truly interesting.

The curtain closer for the National Championships saw the Elite Men circle the 1.1km circuit thirty-five (35) times and for the majority of the race breaks were hardly successful, until the last. Collin Wilson (Braves) snuck away with just about 2.5 laps to go and opened a healthy 400m gap on the bunch. Time Trial champion, Akil Campbell (Sonics) was the first to chase with approximately 1.5 laps to go as he leaped out of the bunch like a bullet. In hot pursuit were also Sheldon Ramjit (Hummingbirds) and Gevan Samuel (Braves) as they tried valiantly to close.

In the end, Campbell left it a little too late as he fell half of a bike length short of nipping Wilson in the last dash for the line. Gevan Samuel was quick enough to beat Marc Pogson (Heatwave) into third as Ramjit rounded out the top five. The main group averaged a speed of over 41km/h.

Ramon Belmontes (Team DPS) continued his road domination in the Junior Men category as he rode away from his competitors with 15 laps of the 20 lap event remaining. Even a neutralized race due to a crash couldn’t stop him. Upon the restart, he once again opened his gap to comfortably take victory with Emmanuel Watson (PSL) taking second ahead of Nicholas Paul (Unattached).

Jabari Whiteman (Southclaine) got the better of Tyler Cole (Sonics) in the Juvenile Men event after Cole dug deep to reel in a half of a lap lead held by Darius Beckles (Parkside), Phillon Trim (Team Easy Goers) and Kemp Orosco (Breakaway). Cole was successful in pulling the bunch back together to set up a mad dash for the line, in which Whiteman was triumphant.

With this event, brings a close to the National Cycling Championships for 2015, an exciting one to note. The TTCF will like to extend our appreciation to the Sports Company of Trinidad & Tobago (SPORTT), Mike’s Bikes, Francis Contracting, The Braves CC, Southclaine CC and RL Photography for their kind and generous assistance which ensured the successful completion of the National Road Cycling Championships. 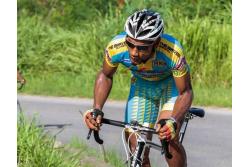