It was a night designed to cater for the Sprinters, and they took full advantage of it as Team DPS’ Quincy Alexander and Breakway CC’s Nicholas Paul dominated the Elite and Junior Men Sprint events respectively.

Alexander clocked a nippy 11.20 seconds in the Flying 200m to qualify first in the Elite 1,2 &3 while Paul was also impressive with a time of 11.50 seconds to also top the Junior Men. Teniel Campbell (Team DPS) qualified fastest for the Elite Women in a time of 12.94 seconds, beating out top sprinters such as Kollyn St. George (Breakaway) and Keiana Lester (Bike Smith) into second and third of the qualification.

Alexander would go on to face Azikiwe Kellar (Team SR) in the finals of the Sprint in a keenly contested matchup which saw the Arima native taking it in straight rides. Paul eased into the Finals where he made light work of young Jabari Whiteman (Southclaine) as the Breakaway cyclist showed some good early season form.

Even though Teniel Campbell was unable to make it out of the Semi-Final round of the Sprints, which saw St. George winning without even sprinting (both Keiana Lester and Aziza Browne scratched their heats), she came back with vigor to take the Elite & Junior Women 2 Laps and 2 Laps Win & Out events.

The night was marred by a spill in the Elite & Junior Women Keirin which saw both Keiana Lester and Kollyn St. George hitting the deck hard. They were both taken to the hospital for further observations and updates at the time of posting indicated that they both were fine and were discharged. Young Stephon Nakhid (Southclaine) didn't have that luck as reports indicated that the Under 11 Boys cyclist suffered a fractured jaw after his spill earlier in the night. We wish a speed recovery to all of the cyclists!

Endurance Night takes centre stage tonight at the Arima Velodrome as the Team Pursuit, Points Race, Elimination and Madison will feature in a night where those with slow twitch muscles tend to dominate. 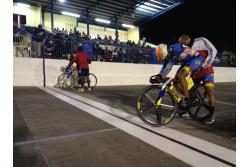