Alexander withdrawn from Pan Am Games

The TTCF was dealt a serious blow yesterday morning when the final analysis of the 2012 Pan American 1kmTT and 2015 Caribbean Keirin Champion, Quincy Alexander's fitness proved that he would be unable to compete at the upcoming Pan American Games.

Alexander who just 2 months ago captured the Keirin crown at the Caribbean Track Championships, couldn't recover from an injury sustained in a pre-competition camp in Mexico City, Mexico. The injury saw Alexander off of his bike for approximately one week while both TTCF officials and doctors in Mexico and at the Olympic Training Centre in Colorado Springs monitored his progress. A final fitness exam on Wednesday confirmed the worst, as it was determined that Alexander had not recovered fully enough from his injury.

This change in the events means that the Team Sprint will be contested by Jude Codrington, Justin Roberts and Njisane Phillip as the track cycling portion of the Pan Am Games pedals off in just under a week. 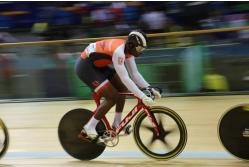