Keron “Bramble Boy” Bramble won the UCI Keirin as the 2016 edition of the Easter International Cycling Grand Prix came to close on Saturday night. The young T&T cyclist took the lead from the moment the bike left the track and never gave it up. With approximately 250m to go, the rush over the top started but Bramble was too strong as he held of the charge by Diego Pena (COL) and Sei Daniel (Arima Wheelers) to take top honours and full points.

The Women’s Keirin was just as exciting as five women came abreast at the finish line. The late charge by Teniel Campbell (Team DPS) over the top was enough to clip Mandy Marquardt (USA) on the line just ahead of Kollyn St. George (Breakway) in third, Keiana Lester (Bike Smith) in fourth and Dana Feiss (USA) in fifth.

Marloe Rodman (JAM) was impressive in the UCI Scratch as he and Jamol Eastmond (BAR) broke free from the pack with just about 3 laps remaining. In the final sprint, Rodman rounded the Bajan to take the win ahead of Stefan Matzner (AUT) who rounded out the top three. Romello Crawford (PSL) of Guyana defeated Tyler Cole (Team DPS) in a sprint finish for the UCI Junior Men Elimination.

The 2016 Easter International Cycling Grand Prix – Where Speed Meets Paradise….See you next year! 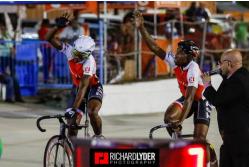